That’s what an underworld figure growls to the bounty hunter in the new Star Wars series The Mandalorian, but it also applies perfectly to a similar masked figure who shocked this year’s galactic fan gathering in Chicago.

That would be a 1979 Boba Fett toy — one of three extremely rare ones, with a firing rocket pack — selling on the Star Wars Celebration show floor for $365,000.

“Bear in mind, that is also going to entail sales tax,” said Brian Rachfal, a longtime collectibles dealer who is brokering the sale on behalf of an anonymous owner. “If it were to sell right here at this convention, you would be looking at basically over $400,000 for that.”

He spoke to EW while standing in front of the glass case displaying the figure at his booth, surrounded by other toy and T-shirt vendors in the vast showroom.

Inside the case, the Fett figure was contained in an even smaller glass box, slowly revolving on a mirrored stand with papers documenting its provenance and history displayed behind it.

This action figure is considered precious because it’s one of only three of its type known to exist.

But also… it represents the fulfillment of a broken promise.

“You never got it, so of course you want what you can’t have,” Rachfal said.

A full year before anyone saw Boba Fett hunt down Han Solo in 1980’s The Empire Strikes Back, the toymaker Kenner began hyping the action figure with illustrations of it firing a spring-loaded red missile out of its rocket pack.

Whoever this Boba Fett guy might be, fans already considered him the coolest toy in the universe.

Kids who bought four other Star Wars figures could cut out their proof-of-purchase seals and mail them in to receive the Boba Fett for free in six to eight weeks. (See the images below via Star Wars Space Club’s Mail-Away Guide.)

Then at the last minute, Kenner feared the rocket mechanism posed too much of a choking and eye-gouging hazard. The company decided against mass producing that toy, making the rocket pack solid instead.

Star Wars collectors received only disappointment in the mail — and for many fans that feeling remains in mint condition four decades later.

“Kenner did a very good job of hyping the toy,” Rachfal said. “We all wanted it, we all visualized it in our head, how wonderful it was gonna be, and then you got that little sickening letter that essentially translated into, ‘Sorry, kid, you’d put your eye out.’” 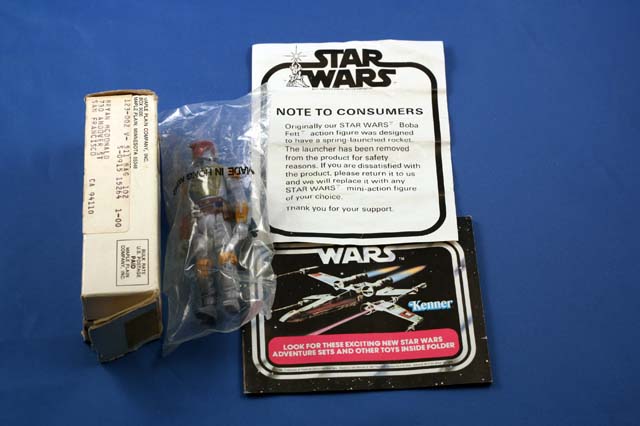 Rachfal was one of those kids himself. “I was depressed for several months, and I just talked to a couple guys here that have gone through the same thing,” he said.

Only a tiny number of prototypes and display versions of the rocket-launching Fett were created back in 1979, perhaps as few as 100, and of those less than about 30 are known to still exist, according to the official Boba Fett Fan Club.

The particular Fett that Rachfal is selling is even more obscure, mainly because the other versions don’t have a copyright embossed on the back of the leg, like his does. That signifies that it was close to the final sculpt ready for production.

It also has the rarer “L-shaped” firing mechanism. (The others have a J-shape.) And its rocket has four sides instead of the more common eight.

Still, the question stands: Is this plastic figure actually worth $365,000?

“This Price Just Blows My Mind”

For perspective, Entertainment Weekly got in touch with Steve Sansweet, who for 15 years, until retiring in 2011, was Lucasfilm’s fan ambassador and director of content management. Now he runs Rancho Obi-Wan, a museum in Petaluma, Calif., which is the world’s single largest collection of Star Wars memorabilia.

“I about spit out my breakfast when I read your email,” Sansweet said in a phone interview. “Geez, this price just blows my mind. Although the prices in auctions of Star Wars memorabilia, especially props [from the movies,] have gone crazy in the last couple years. So this is in line with that.”

“Brian is a legitimate guy,” said Sansweet. “He knows the high-end collector market. He may have some idea there are two or three collectors out there who have a lot of money and are desperate for a rocket set, but as you point out, in many markets in this country, that’s the price of a house. You could buy a couple of high-end Teslas!”

“If it were up at auction, do I think it would go that high? I would tend to doubt it,” Sansweet said.

The resurgence of the Star Wars movies has galvanized the collectibles market, but still Sansweet said “it would be interesting to see if [Rachfal] sells it for anything near that.”

Although Rachfal is well known and respected, “he’s also the guy who tries to move the market,” Sansweet said. “And this would certainly be a market-moving private sale.”

In his Rancho Obi-Wan collection, Sansweet also possesses one of these three known Rocket Fetts. Earlier this year, Rachfal contacted him to see if he would sell it, Sansweet said.

“He said he had a buyer for mine and was willing to give me a six-figure price for it. Obviously, he would have marked it up somewhat. But this [$365,000 price] is something I never would have thought possible. The amount of money he offered me was pretty astounding, too.”

Is Sansweet’s exactly the same, with the copyright notice on the back leg?

He said he wasn’t 100% sure. But he was definitely going to check when he got back to the museum.

As the convention drew to a close, there were still no serious offers, but Rachfal, who operates out of Roseville, Calif., near Sacramento, said he hoped the attention will attract some offers in the weeks or months ahead.

“I’ve handled high-end pieces before and it takes time to move them. Especially because some people assume that this is going to go to a celebrity or someone who just has money and they’re going to go throw it out there,” he said. “They vet things, too. They’re going to be careful before they spend that type of money.”

He said sometimes there are “average collectors” who, in the interest of simplifying, occasionally cash in a larger collection for one signature item like this.

“They will sometimes sell off quantity for quality,” Rachfal said. “But they have to decide if that’s what they want to do. It takes time. This might be a piece that someone says, ‘I want it, but I’m going to need to raise some funds.’ What I have learned with these collectors is not to be presumptive of who’s going to buy something like this.”

The Rocket Fett he’s selling was in the possession of a Kenner engineer for decades until a collector purchased it in 1994, around the time the Cincinatti-based toy manufacturer was purchased by longtime rival Hasbro. Kenner’s product line was absorbed, and the company shut down in 2000.

In 1999, this Rocket Fett was sold to a Japanese collector, and Rachfal was instrumental in acquiring it on behalf of the current U.S.-based anonymous buyer. Now it’s for sale again.

Not everyone who buys these does so for nostalgia. Rare Star Wars toys can be as much of an investment as buying a house to flip.

In addition to this one, Rachfal advertises a finder’s fee on his website for anyone who might help him locate any other rare Rocket Fetts that are on the loose.

This retro Star Wars toy is selling for $365,000 — plus tax
this link is to an external site that may or may not meet accessibility guidelines.